Are You Rolling the Dice on Counterfeit Chips? 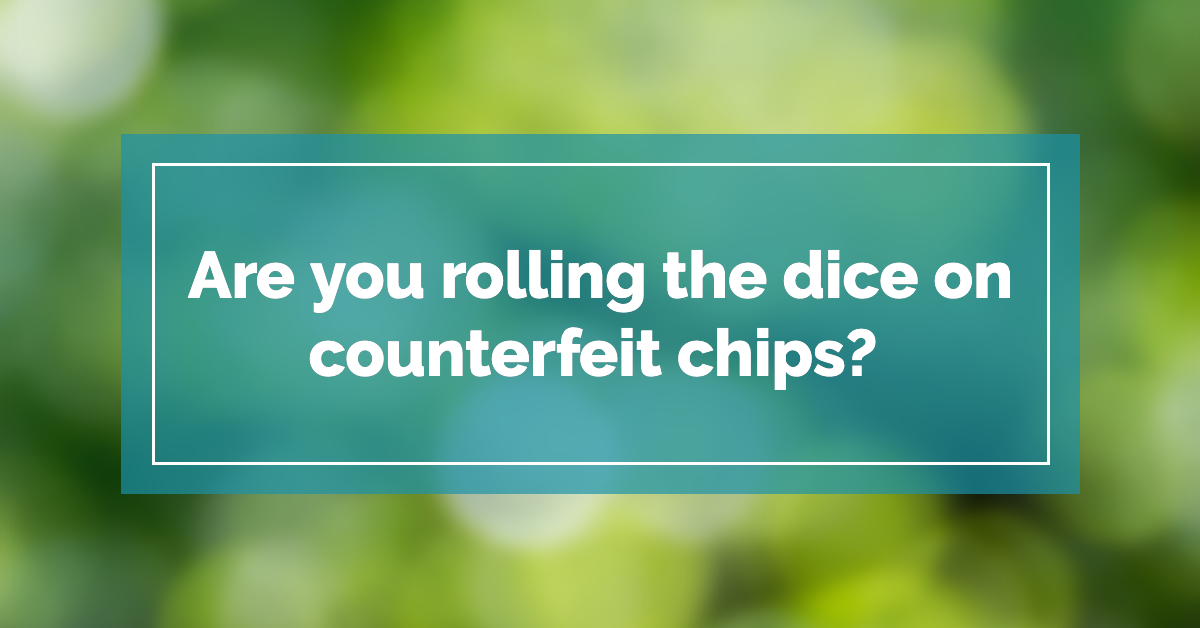 Vegas has been dealing with fake chips for years, but the gambling industry has developed ways to separate the frauds from authentic chips.

Companies buying semiconductor chips could take a lesson from this playbook, because counterfeit chips are on the rise — with some reporting that the annual losses are in the multiple billions.

Because suppliers have not always been able to reliably purchase chips directly from factories during the supply chain crunch, many have started exploring alternative avenues, including third-party marketplaces. But this often leads them to the “gray market of counterfeit parts,” a sketchy universe of questionable chip quality.

They are called “gray markets” because while the purchase mechanisms are legal (unlike the black market), the chips sold are misrepresented as genuine. False packaging, serialization, and hardware markings are designed to swindle buyers.

With a significant easing of low supply not expected until the end of 2022 or early 2023, buyers must be proactive to protect themselves from purchasing counterfeit chips.

Until the supply chain reaches equilibrium, many counterfeit chips will likely infiltrate supply chains,  as increasingly desperate companies hoping to bolster their component stores have turned to third-party marketplaces. Eventually, these components may make their way into commercial and consumer devices. While not all counterfeit semiconductors perform poorly, they’re also not likely to support long-term dependability.

The issue even transcends counterfeiting. Many dishonest sellers are passing off damaged, aging chips as brand new. This can lead to increased warranty claims, replacements, and expenses for all parties.

How to Avoid the Fakes

Several companies have developed imaging solutions designed to spot bad chips. The process includes an x-ray fluorescence analysis and an energy-disruptive spectroscopy that probes deep into a chip’s structure. While expensive, and so primarily suitable for larger yields, this process is a reliable way to spot internal chip inconsistencies.

Counterfeiters can easily match the paint or outer material to an authentic item – but to get the inner framework, alloys, and guts is a much greater challenge and more expensive, says Creative Electron.

The company developed a simple-to-use, fast, and automated X-ray inspection system that helps separate the good from the bad chips. X-ray inspection exposes the insides of products, not just what is on the surface.

There are two types of functional testing that manufacturers can use. The first involves simply running voltage through components and assessing truth-table conformity. Though effective at uncovering glaring issues, this process does not dive deep enough to test tolerances.

This is a non-technical approach to identifying counterfeit chips that involves component tracing across all links in the supply chain and regular compliance checks. Done right, the process can help ensure that authentic semiconductor chips are being used.

Cofounder of the Electronic Retailers Association International (ERAI), Kristal Snider, recommends that chip buyers obtain references from other reputable industry players before doing business with a new supplier. She suggests buyers research the online presence of a potential new partner and look out for possible inconsistencies. For example, if a provider claims to have been around for several years, but their website registration is only a few months old, that is a red flag.

Looking to the future

A new self-powered and self-erasing chip technology could serve as an anti-counterfeit or tamper-detection system, according to the University of Michigan, where it’s being developed. This new technology would indicate whether a secure system’s casing has been opened and exposed to light.

The chips are made from a new material called Beyond Graphene. The material consists of an ultra-thin (three atoms in thickness) layer of semiconductor laid on top of a film of azobenzene molecules which can change color while temporarily storing energy.

It enables messages, barcodes, or QR codes to be written on the chips themself. When they come in contact with ultraviolet light, the azobenzene molecules naturally shrink, allowing a chip to store its message in the dark, but erasing it once it’s exposed.

Clearly, counterfeit chips are a significant challenge and need to be addressed. Knowing about the problem and viable solutions can go a long way to helping you avoid gambling on the gray market and be fooled by fake chips.