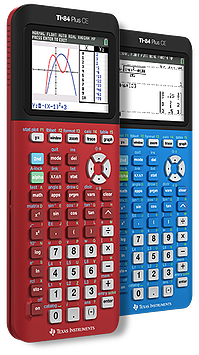 In the mid 80’s, Casio released the first commercially available graphing calculator. Three decades later, the dominant player in this niche market isn’t Casio, but Texas Instruments (TI). TI didn’t begin producing its own graphing calculator until the early 90’s, but since then it has never let off the pedal.

The company recently announced the TI-84 Plus CE, a revamp of the TI-84 Plus. It boasts a slimmer and sleeker design than its predecessor.

It’s hard to get excited about a calculator in this day and age. But let’s ask ourselves this: can a smartphone or laptop replace a device designed for the sole purpose of doing math? No.

TI claims the TI-84 Plus CE is a onetime investment for parents. This means students will be able reuse the device throughout grade school and college. Although the device isn’t designed for use in high level electrical engineering courses, it is useful in just about any college math class (calculus, statistics, etc.).

Another fun thing to point out about TI’s latest installment of graphing calculator is its ability to install apps. If you’ve ever tinkered with a TI-83 and managed to load Tetris onto the calculator, you’ll be happy to know that the process of adding extras to these calculators has been vastly simplified. It’s almost like installing apps onto a smartphone or tablet, but in this case it’s onto a graphic calculator. How much entertainment your kids will get out of playing on these calculator-based apps is up for debate, but it beats having the teacher take away a smartphone during class.

TI isn’t planning on releasing the TI-84 Plus CE until this spring. When it does hit the market, however, students will be able to choose from silver, red, blue, hot pink, plum and black models.