Is Moore’s Law dead? According to the International Technology Roadmap for Semiconductors Executive Report, Moore’s Law could meet its fate within the next five years. But while Moore’s Law is dying, the world of semiconductors is changing. And how will this change affect semiconductor companies and the types of engineers they hire?

Intel Co-founder, Gordon Moore, observed in the 1960s that the number of transistors per square inch on an integrated circuit doubles every two years, thus identifying what we know today as Moore’s Law. Over the years, Moore’s Law has developed from a way to explain the evolution of transistor scaling to actually defining trends in the chip making, semiconductor industry.

While Moore’s Law has continued to prove correct for over 50 years, we could see an end to it as soon as 2021. 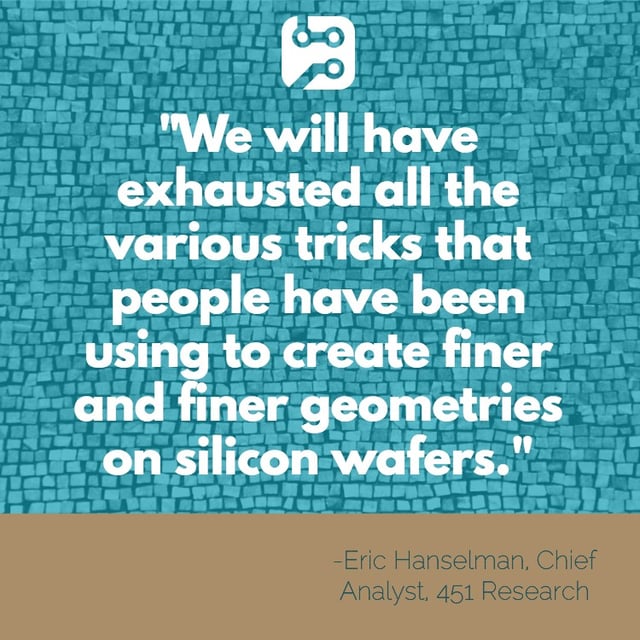 While many call it the death of Moore’s Law, economically speaking, it’s truly Moore’s Law succumbing to the Law of Diminishing Returns. By 2021, the cost to shrink transistors may not be worth the benefit of shrinking them. It will no longer be economically viable for semiconductor companies to continue pursuing and producing.

"We will have exhausted all the various tricks that people have been using to create finer and finer geometries on silicon wafers," said Eric Hanselman, Chief Analyst at 451 Research.

"The whole point in any semiconductor process is to make sure that you minimize the number of steps that you have to subject a particular silicon wafer to," says Hanselman. "Each time you run through another processing step, you introduce the potential for alignment errors in the lithography."

What will replace Moore’s Law?

Instead of the amount of transistors per square inch doubling on an integrated circuit every 24 months, we will likely see new and alternative ways of integration and scaling, including vertical geometries and 3D structures.

It’s no longer about increasing clock speed but rather decreasing power consumption.

We’ve reached the point where we may be making chips operate about as fast as they can so companies are better off focusing more on decreasing power consumption not just increasing speed.

When we saw the semiconductor industry shifting its focus from shrinking individual chips to adopting an SoC or device-centric model in 2015, they emphasized capability integration and reduction in power consumption over clock advances.

According to the ITRS report, conventional 2D transistor density scaling will end by 2021 and 3D integrated circuits will move to the forefront of microprocessors.

The major challenge, however, lies in stacking transistors. When you stack memory transistors on logic transistors, heat may get trapped in the die causing the layers to melt. So, the first chips to rely on integrated CPUs will likely be low-power devices in order to maintain appropriate thermal dissipation. This will be much harder to accomplish in the cores of a laptop or desktop computer.

As we see the death of Moore’s Law draw near, engineers are getting out of the box in search of alternatives to 2D processors while working to overcome the obstacles of 3D design. This leads to a new way of thinking which, in turn, requires new skills for engineering talent.

How will the end of Moore’s Law change the talent needs of semiconductor companies?

One of the biggest challenges in hiring an engineer is knowing what kind of talent you need. Managers may stumble over knowing exactly which kind of engineer they need for a certain project including what skills, skill level, and expertise will be required. As semiconductor companies start turning toward 3D design over doubling transistors, the criteria for engineering talent change.

Successful engineering talent will be creative problem-solvers who can think outside the box of traditional circuit building. How can we create chips that run on less power? Can we stack transistors without melting the layers?

The ITRS report makes it rather clear that the engineers who seek to improve CPU performance will not focus on improving clock speed, but rather find alternative ways to architect hardware and reduce power consumption. And these will be the engineers who drive success for their semiconductor companies.

As the adoption of 3D structures  has already begun, it’s important to develop your talent repository now so when the time comes to find the right engineer you need, you’ve got candidates ready. And when you start to develop a team ready for the end of Moore’s Law, avoid vague job descriptions. Instead, adequately establish expectations about the job and skill requirements. Know what kind of talent you’re looking for and portray that information clearly and accurately. Get more help about optimizing your hiring process in our Guide to Hiring Top Engineering Talent.